The whole fabric of honey bee society depends on communication—on an innate ability to send and receive messages, to encode and decode information.

Since the first appearance of the Varroa destructor parasite in eastern Serbia, in the mid-seventies of the last century, it's been almost forty years. During this time, this parasite commonly known as a tick, although it would be more correct to call it a mite, caused enormous damage to beekeeping, both in our country and in other countries around the world. In the meantime, it has been found that varroa serves as a vector and transmitter of various viruses, and possibly other microorganisms harmful to honeybee.

The beekeepers mainly relied on the use of various chemical preparations, which resulted in some negative effect on the quality of the bee products, in order to prevent the greater decline of bee colonies. In addition, varroa has over time acquired resistance to various miticides. Since Varroa first arrived, it has been observed that unmanaged honey bee populations can evolve resistance to varroa. Based on the experience with other agricultural (animal and plant species) it could be assumed that natural selection would eventually bring about the balance of hosts - honey bees and varroa mite. Consequently, selective breeding should produce more tolerant bees.

It was shown that this was possible by our mutual US Department of Agriculture-Yugoslav scientific project in the second half of the eighties of the last century. Then, after three generations of bees it was shown that more tolerant lines survived, and less tolerant collapsed. Since this procedure was one-sided such bees were less productive. After the completion of the project, this approach was abandoned. Our beekeepers naturally appreciated higher honey productivity and start using many miticides. In "Agroeconomic Institute" in Belgrade, from the mid-1990s, we continued with the selection program for honey productivity, and varroa tolerance. 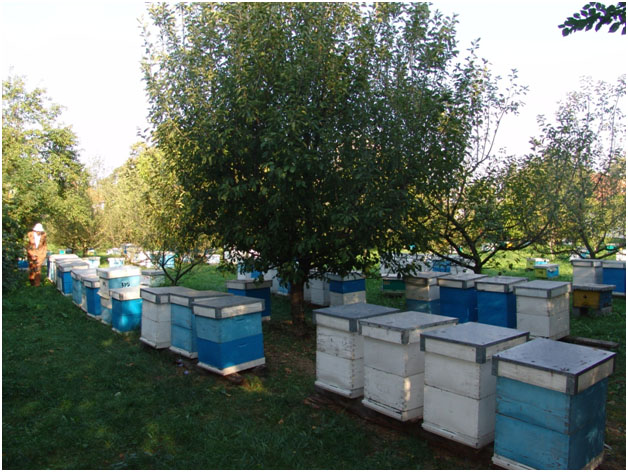 It can be seen from the chart in this study that the range between 78 and 100 honey bee colonies were used, or on average 88 colonies that form 8 selection lines. In order to assess rate of infestation, the treatment was carried out with certain miticide compound at September 6, each year, except 2013, when the treatment started on September 10. In other periods of year there was no suppression of mites. Up to 2000, Aprivar stripes on the basis of fluvialinate were used, and since 2000, CheckMite plastic stripes with the active substance cumafos. From 2009 to 2015, besides the mentioned, comparative test with Argus Ras and some other domestic miticides have been tested.

All honey bee colonies had bottom board with wire net and metal inserts, on which varroa fall down after treatmant. Counting of varroa was carried out daily during first weeks with high mite count and then with decrease of number of fallen varroa every 2 or 3 days. After the basic treatment, which ended around 10 October, a follow-up treatment was carried out in November to determine the relative effectiveness of the previous treatment. For this purpose, Apitol, or in several recent years, oxalic acid was used.

Analysis by year and infestation rate

From the observed period of 21 years, it is obvious that in 1999 there was the highest number of varoe, on average for 86 hives was 1829.1 per colony. That year, in one colony, there were counted about 10,500 varroa. Nevertheless, the bee colony survived the winter period. But it was reduced to 3-4 occupied frames. The cause of this society's survival is probably the absence of a higher virus activity and other adverse factors. We, like other years, did not have any loss caused by varroa on the selection apiary. The infestation was much smaller in 1998 than in 1999. 1999 was the last year in which Apistan stripes was used to control varoe, as we noticed that their effectiveness began to decrease.

In 2000, the use of the Checkmate tape was started. Their use lasted until 2013, when their efficiency was 85%. After them were applied Argus Ras stripes, and then, in December and oxalic acid. After this last treatment, no mite fall on bottom board was registered.

In 2001, there was again an increase in the number of counted varroa, but not so drastic as in 1999. There waa an average of 460 mite per hive. In 2002, this number decreased. According to the then perceived cyclicality alternating increase and decrease the number of mites, we expected in 2003 varroa infestations will raise again. To our great surprise, this did not happen. On the contrary, the average number of parasites on insert below the net drastically decreased to 39.5 per bee society. It was not clear why this happened. We assume that some factor, or several factors, influenced the intensity of propagation of the varoe during the broad expansion. This can be brought into line with our earlier known observation of the appearance of infertile females in 1989. Whether this was the case or it was something else we don’t know. In 2004, instead of retaining such a low or slightly higher level of contamination, there was a dramatic increase in the number of counted varroa mites, with an average of 1297.3 varroa per hive. In 2005, a decrease of infestation similar to that of the previous period was reported, but still somewhat more than before. Next, again in 2006, there is a large infestation, the second in the quantity of fallen parasites, immediately after 1999. During 2007 and 2008, we have a gradual decrease in infection, without an alternate increase and decrease in the number of counted varroa.

From 2009 to 2015, a period of seven years of very low infection occurs. In this period, the highest average of the fallen varroa in 2010 was 247.6 per hive. Interestingly, in these seven years there is an alternate decrease and an increase in infection, but with minimal differences and at a very low level. The absolute minimum infestation in the last sixteen years was in 2012, on average 23.2 mites for 97 bee hives. In the next year, 2013, there was an increase of 125.4 fallen parasites. In 2014 there was a slight increase in the number of fallen varroa, in 2015, again, the number of fallen varroa decreased. In 2016 there was an increase in the number of counted varroa, an average of 505.16 per hive, we believe that this was due to mild winter and varroa colected the sunflower pasture. In 2017, the number of mite fall again, on average, 101.91 varies were counted, and probably this was because of a dry year in addition to the selection. In 2018 there was a rise in the number of mites, on average, 545.33 were registered. A moderately warm and moist summer was ideal for the development of the mites, and the large amount of varroa that was collected on the linden and sunflower pasture. This is also evident from the fact that only 64.7 varoa per hive was counted on our breeding apiary that hes not been moved.

On the basis of everything exposed, it can be concluded, at least for the time being, that the long-term control of varroa infestation and the consideration of this factor when selecting mother-mothers in the selection of bees on honey productivity and reproduction of the queen led to the stabilization of the relationship between the honey bee as host and varoe as parasites. These beekeepers who use "Apicentrars"queens can control varroa with minimal intervention in the autumn with appropriate means.

Of course, we do not know if this achievement is mainly the result of the selection or the influence of some other factors. Similar long-term monitoring of the infection of other genetic populations was absent in our country. Since this article is intended for beekeepers, it does not have the structure required for publishing in journals of a strictly scientific character.